Crianças De Capoeira Angola
“It is the practice of this science, my comrades, you yourselves don’t know what you have in it. If it is yours, try to perfect the nature it gave you; trust in yourself, love your sport, don’t trust in the egoist, and verify the truth. In summary, it is an infinite fight, the general and abstract definition that characterizes every existence, and every being.”
~Mestre Pastinha

​THE ANCIENT ART OF CAPOEIRA ANGOLA

Mestre Pastinha
Capoeira is an Afro-Brazilian martial art form with origins in the Bantu regions of Ancient Africa.  It combines elements of dance, fight, natural movement, and theatrical improvisation with the rhythmic sounds of traditional call and response music.  The Atabaque, Berimbau, Agogo, Pandeiro, and Reco Reco give birth to the instrumental battery that charges the Roda de Capoeira Angola.

HISTORY
Arriving in the 16th Century in Brazil, Capoeira was developed  as a tool for Africans to fight against the oppression of slavery.  Capoeira was banned in the late 1800's for 30 years with participation in the defense resulting in torture, prison, and death.  For almost 400 years Capoeira Angola was taught and practiced in secret... only in the 1930's did this African martial art become legal to teach and practice.

In 1941, Vicente Ferreira Pastinha founded Centro Esportivo de Capoeira Angola (CECA) in the Salvador neighborhood of Pelourinho.          This school attracted many traditional Capoeiristas. With CECA's prominence, the traditional style came to be called Capoeira Angola.
​
​To those who have held fast to the Rope of Capoeira and the perpetuation of its wisdom, we thank you;
On November 26th 2014, Capoeira was granted a special protected status as "intangible cultural heritage" by UNESCO.

CRIANÇAS DE CAPOEIRA ANGOLA uses the Ancient Holistic Art of Capoeira Angola and its joyful play to expand the players reality of life.  "Training the use of positive action to overcome old and new obstacles are shared.  Due to the exchange of wisdom players are catapulted forward in understanding themselves and their surroundings; to act, not react and to make the best use of truth, patience, unwavering calmness and humility to attract overall well-being in the Roda (wheel) of life." 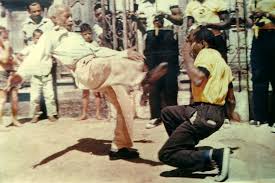 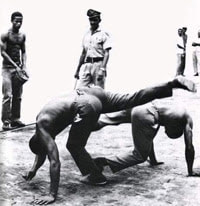 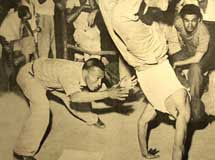